May 4th and 5th was the Points West Appaloosa Horse Show at Rancho Murieta. We arrived during a break, so only have a few shots from the warm up. 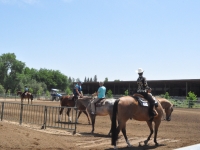 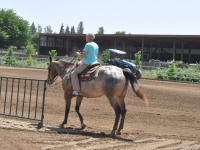 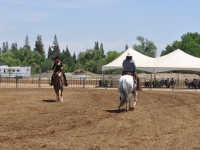 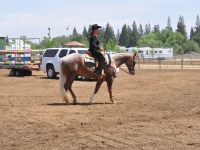 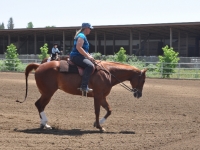 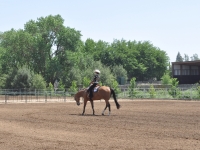 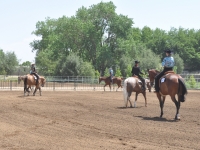 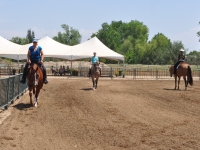 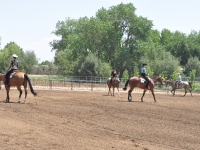 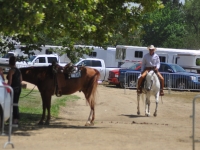 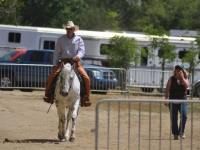 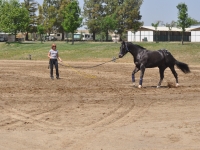 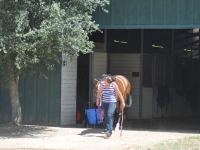 Three English horses with spots. Can you tell which one is Appaloosa (ApHC), Knabstrupper, or Pony of America (POA)? Three similar horses, but very different breeds.

Here is the answer: The first picture is a Knabstrupper, the second a POA, and the third is a registered ApHC Appaloosa. Did you guess correctly? Check out some facts on these colorful and versatile horses:

From the ApHC site:
Prior to the introduction of the horse, the Nez Perce were sedentary fishers. Horses gave the tribes greater mobility and power, altering their culture forever. Soon, the Nez Perce were famous throughout the Northwest for their hunting skills and craftsmanship. These skills allowed the Nez Perce to trade for necessary goods and services.

With their superior horses they had little difficulty killing what buffalo they needed. Soon they began to use the Plains-type tipi in place of their old community housesâ€¦Heavy stone mortars and similar burdensome possessions were either discarded entirely, or left at the fishing spots for occasional use.

Famous explorer Meriwether Lewis was appropriately impressed with the breeding accomplishments of the Nez Perce, as noted in his diary entry from February 15, 1806.

Their horses appear to be of an excellent race; they are lofty, eligantly [sic] formed, active and durableâ€¦some of these horses are pided with large spots of white irregularly scattered and intermixed with black, brown, bey [sic] or some other dark color.

It is unknown how many of the Nez Perceâ€™s horses were spotted, but a possible estimate is ten percent. Settlers coming into the area began to refer to these spotted horses as â€œA Palouse Horseâ€, as a reference to the Palouse River, which runs through Northern Idaho. Over time, the name evolved into â€œPalousey,â€ â€œAppalousey,â€ and finally â€œAppaloosa.â€

In the late 1800s and early 1900s, interest in the breed gradually began to grow as Appaloosas began appearing in Western roundups and rodeos.

The Appaloosaâ€™s flashy coat patterns caught the eye of the public, and in 1937 an article in Western Horseman entitled â€œThe Appaloosa, or Palouse Horseâ€ revealed a widespread interest in the breed.

With the goal of preserving and improving the Appaloosa breed, the Appaloosa Horse Club was chartered in 1938. From those first few enthusiasts, the Club has grown into one of the leading equine breed registries in the world.

On March 25, 1975 Idaho Governor Cecil Andrus signed a bill naming the Appaloosa as the state horse. This is a deserving honor for a horse that has been an integral part of Idaho history.

Today, the beautiful spotted horse is one of the most beloved of American horse breeds and can be found throughout the world, excelling in disciplines including western pleasure, games, working cow horse and dressage. Appaloosas are prized for their easy-going dispositions and their reliability as family horses.

From the American Knabstrupper Association

Believed to have originated from the pre-history spotted horses of the region of Europe now known as Spain, the Knabstrupper is one of the oldest breed registries in Europe. Established in 1812, the Knabstrupper started with a single chestnut blanketed mare purchased by a Danish butcher named Flaeb from a Spanish cavalry officer. The mare, who became known as FLAEBEHOPPEN (which literally means â€œFlaebâ€™s mare), was purchased by Major Villars Lunn who owned an estate called â€œKnabstrupgaardâ€ in Holbaek, Nordsealand, Denmark.

Flaebâ€™s mare was bred to a Fredricksborg stallion and produced a wildly colored stallion son who was named Flaebehingsten. Between the two of them, Flaebehoppen and Flaebehingsten were bred to a large variety of good quality horses, producing loudly colored offspring and grand offspring and establishing the Knabstrupper horses as some of the most sought after in Europe at that time.

Knabstruppers are valued for their kind temperaments, high level of trainability, strength, stamina and good health as well as for their wonderful color. Over the past two centuries, there have come to be three rather distinct types of Knabstruppers: the Sport Horse type, the Baroque type and the Pony type. The Sport Horse type has been bred to excel in dressage, eventing and show jumping and has been developed by crossing the Knabstrupper with the warmblood sport horses of Europe, most notably the Danish Warmblood and the Trakehner. The Baroque type is a shorter, broader horse reminiscent of a carriage horse or war horse and was very popular as a circus horse. The Pony type is smaller still and is a favorite of children all over Europe.

The Knabstrupper horse exhibits the same color patterns as the American Appaloosa, as they share the same color genes. The most popular color pattern is the leopard with its solid white background covered with black, bay or chestnut spots. Other patterns include the blanket, the snowflake, the snowcap and the â€œfew spot,â€ an almost solid white horse that, when bred, always produces a foal with a spotted pattern of some kind.

The head has large, expressive eyes with a small, refined, and sometimes has a “dished” face similar to an Arabian. The body is more like a stock horse, with plenty of muscling like a Quarter Horse, with a broad chest, round belly, sloping shoulders, and powerful hindquarters. The pony should have free-flowing movement, and the tail is never carried high. Today’s POAs have the desirable movement of a forward-moving Quarter or Appaloosa horse. Troping and “peanut rolling” are discouraged. A level head set, smooth, slow movement and true gaits are desired.

The coloring of the pony must be the markings of an Appaloosa, and visible from a distance of 40 feet (12 m). This includes the spotted coat in any Appaloosa pattern and the white sclera, mottled skin around the eye, muzzle, and genitals, as well as striped hooves.

The POA first was developed in 1954, when Leslie Boomhower, an Iowa breeder of Shetland Ponies, founded the breed. A friend offered him an Arabian/Appaloosa mare that had been accidentally bred to a Shetland Pony stallion. Boomhower accepted the offer after the foal, a colt, was born. The Appaloosa-marked colt was named Black Hand, and he became the foundation sire for the breed.

Other breeds, including the American Quarter Horse, Welsh Pony, Thoroughbred, Mustang and Arabian have been used to infuse athleticism, stamina, and size.

Today there are almost 50,000 registered POAs in the United States. The ponies are presently being bred to have less Shetland Pony blood, with breeders striving for conformation that resembles a horse rather than a pony.

Look for more Similar but Different breed articles coming in the future!